In bright sunshine on a low tide, the Molunan beaches felt like a private haven amidst the yachting activity on Carrick Roads.  Sailing boats made their way out, from Mylor, Flushing or Falmouth, to round St Anthony Head, perhaps just on their way to Porthbeor beach on the other side of the headland, or maybe on to Fowey, the Yealm or further afield.  One or two had anchored off Great Molunan beach, their sailors now gazing across to Falmouth and the Helford Estuary from these beautiful beaches.

A summer walk on the Roseland – photo gallery

Looking down on the Molunans, with Sam and Georgina in the sunshine.

On the rocks at low tide, between Little Molunan and Great Molunan beaches.

This was a bright, clear, sunny day at the Molunans on the Roseland Peninsula.  However, the approach to the beaches from St Anthony Head lighthouse told a story of storm damage, as the wooden walkway to the beach lay in tatters.  Such is the diversity that one finds at the beach that it didn’t seem possible, as this visit’s weather was so benign.  The ebb tide cast gentle breakers against the soft sand, a world away from the wildness that had just passed.

The changing face of the beach for Anthony.

Winter sunshine at the Molunans.

The tide was high, covering Great and Little Molunan beaches. Today’s scene-setter was from above the beaches, next to St Anthony Head lighthouse, scanning the Carrick Roads and the surrounding beaches covered by the series, as this was the last summer visit to the Roseland Peninsula for this year.  Stuart and Adele were fishing from the WWII jetty at the Molunans, which Nicky from a previous visit explains as the access point for her regular swims.

Stuart’s empathy for the sea.

A fine vista from above the Molunan beaches on the Roseland Peninsula.

The sun broke through, after a spell of low pressure.  The Molunan beaches are isolated and natural, located on the bottom tip of the Roseland Peninsula.  Despite their isolation, you can see wildlife, boats and Falmouth itself from here.  You’re effectively right under St Anthony Head lighthouse.  The sailing and fishing boats seem to pass within touching distance, on their way out to Falmouth Bay and beyond.  They look like they’re starting a great adventure and you want to jump on board for the ride, to go where they’re going, as they battle out into the open sea.

With Pat on Great Molunan beach.

This was a spectacularly beautiful morning.  Great Molunan and Little Molunan beaches face West at the foot of the Roseland Peninsula, opposite Falmouth on the Carrick Roads.  They are next to St Anthony Head lighthouse and there is parking at the top of the path down to the beach.

Chatting to Nicky in an idyllic setting on Great Molunan beach at the end of January.

Find any beach by the maps below 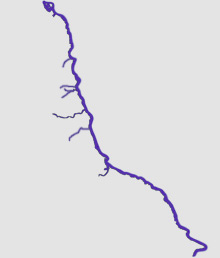